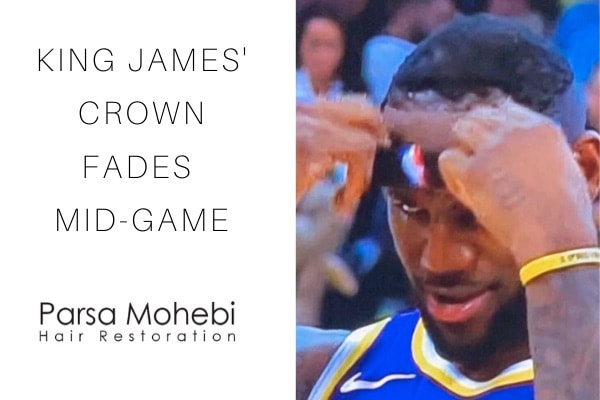 When it comes to “fadeaways” on the basketball court, LeBron James is one of the first names that comes to mind for both good and bad reasons. Not only does King James have one of the most insane turnaround fadeaway jumpers ever seen in the NBA, his “fadeaway” hairline has been scrutinized, analyzed, and examined by the media and public for quite some time now.

In fact, this is not the first time we have taken part in analyzing his hairline on our blog. We’ve been covering the miraculous return of his hair, as well as the journey his hair has taken from Cleveland to Los Angeles as far back as 2015.

The reason we are talking about his hairline again is because it has gone viral thanks to his new teammate, Anthony Davis. Watch the clip below as it shows what appears to be Davis telling LeBron his hair is actively falling out in the middle of a game:

Since this video has surfaced on the Internet, the public has gone wild with reactions and theories explaining what is going on with LeBron’s hair. If you want to know more about the hairline of King James, we are here to review some of the most popular theories and give you the hard facts about what is actually going on with LeBron’s hair and his possible hair loss!

Theory #1: His hairline was actively receding during the game.

Whether this theory is a joke or not, the most common reaction about the clip was that LeBron’s hair was vanishing right in front of our eyes. This is likely not the case as, according to Dr. Mohebi, it is nearly impossible to notice any amount of hair loss in a time frame as short as a single NBA game. A more plausible explanation is that LeBron may have been using a topical concealer, like Toppik, which could simply rub off or fade noticeably during the course of a game.

Let’s examine the following picture posted on Twitter as evidence: 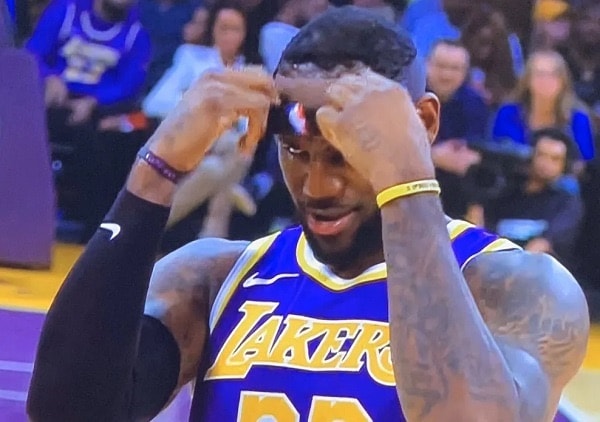 Although the picture is not a clear one, it does seem like James has some hair on the back of the scalp that is manipulated by some sort of concealer. It also appears that the entire top section of his head is covered by concealer which likely means that the concealer covering his hairline in the front has been removed by the headband and/or sweat.

Theory #2: His hair does not respond well to sweat.

One of the most popular theories we have seen is that his hair transplant is not responding well to sweat. Although this may sound like a logical answer, the excessive amount of sweating during a game would not have a negative effect on a hair transplant. However, sweating may wipe off concealers like Toppik.

The Solution for King James:

With all of the proven hair restoration options that have delivered natural looking results over the years, it makes us sad to see one of our favorite stars have to go through this humiliation time and time again. After helping athletes deal with their hair loss in our Los Angeles, Beverly Hills and San Francisco hair restoration medical offices for a decade, we have pioneered and mastered state-of-the-art hair transplant techniques such as Power Hairline® and Celebrity Hair Transplant™ by Dr. Parsa Mohebi that does not require any shaving and has a minimal recovery time.

People like LeBron, who have a receding hairline or thinning on the top of the scalp, could easily be helped with our cutting-edge hair restoration procedures. Many of our hair transplant techniques do not require any shaving or cutting of the hair and the patient will get their hair styled and blow-dried before leaving the office (if need be). They can even resume their work schedule and any other activities the day after the procedure! These techniques can be used in an effective manner for both straight hair and African American Hair. Any of these hair restoration choices would end the hair loss struggle for this amazing athlete for good!