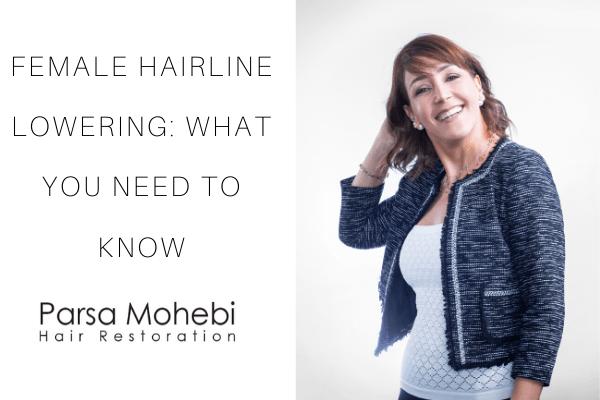 Female hairline lowering can easily be accomplished thanks to FUE hair transplant. Many women have a high hairline due to genetics, male-patterned hair loss or other surgical procedures. A hair transplant is an effective way to permanently reshape or reposition a female hairline from a masculine, or receded one, to a more feminine and attractive hairline.

Why is the hairline so high?

The causes of high hairline in female patients are numerous:

How can a Woman Reduce or Lower her Hairline?

A woman’s hairline can be lowered by a female hair transplant. The artistic approach for creating a natural-looking hairline is crucial. Special attention should be given to the direction and distribution of the transplanted hair. Every hair should be placed by considering the direction, curvature and distribution of native hair in the area. Designing a new hairline for a woman who never had a natural hairline is very meticulous. A hairline should be designed by considering the proportions of the entire face. A natural hairline makes the face more proportional and brings balance and harmony to the face.

Some patients may bring pictures of women with perfect hairlines. If the structure of the face is similar, it is possible to recreate those hairlines. At times, we may recommend a different hairline after examining the other components of your face and determining which hairline looks better on you. Women who undergo a hairline lowering procedure due to male patterned baldness or previous surgeries may also decide to make their hairline more attractive than what they originally had. Adding lateral humps (protrusion of hairline on the sides) and widow’s peak (forward advancement of the center of the hairline) may add character and charm to the faces of some individuals while helping to better frame their faces. Different hair is used to restore different areas of the hairline.

Both FUE and FUT can be used to harvest hair from the donor area for hair lowering procedures. FUE is the procedure of choice for women who don’t want to have any pain after the procedure or a scar on the back of their heads.

Surgical hairline lowering is an alternative procedure to hair transplant that some women may choose. This procedure removes a strip of skin from the upper portion of the forehead and, by doing that, lowers the hairline. This surgical procedure has a quick effect and, unlike hair transplant results, the lowered hairline might be noticed immediately after the procedure. A few disadvantages of surgical hairline lowering are that the scar will be noted in front of the hairline as well as the presence of a linear and unnatural hairline. Some patients may need a small hair transplant procedure to break down the straight line of the hairline and to hide the linear scar in front by putting a few hair follicles in the front of their surgical scar.

Before and After Hair Transplant for Hairline Lowering

Hair transplant results can be seen after the first three months but it takes a few more months for the new hair to grow longer. The results of a hair restoration procedure to lower the hairline follow the typical pattern of other hair transplant procedures. The results are usually seen 8 to 12 months from the time of the procedure. The full appearance of the new hair is seen when the hair is long enough and can be combed and styled.

Are you or someone you know dealing with a high hairline? Click here to schedule a female hairline lowering consultation appointment today!