This is promising news for those individuals who previously underwent a hair transplant using outdated methods such as hair plugs or mini/micro grafts. A corrective procedure using the latest techniques such as FUT or FUE will undoubtedly improve the appearance of unsightly plugs.  In most situations, a revision hair transplant can restore a more natural appearance to an otherwise unnatural look. 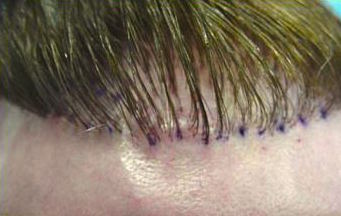 From its inception, hair transplantation hair plugs ranged in size from 2-10mm. These plugs could move hair from the donor area to balding areas on the scalp but they were unable to create a hairline with a natural appearance. In the early years, plug surgery hairlines were like tufts of isolated hair amid an ocean of scalp making transplanted hair quite obvious and unsightly. In the ensuing years, plug surgery improved with grafts decreasing in size to as small as 1-2 mm. These grafts were called minigrafts and micrografts and were considered a vast improvement over plugs. Despite being smaller grafts, the results were still detectable.

Treatment of plugs – Plug revision and improvement upon the outward appearance of the surrounding scalp can easily be achieved with new FUE methods that can address two problems concurrently:

The typical appearance of a native (non-transplanted) hairline is typically comprised of two rows of follicular units consisting of one single hair. Between the extraction and placement process, hairs are sorted and counted. If this step is skipped, and hairs are not properly selected before placement, it is highly likely that grafts containing 2 or 3 hairs will be erroneously placed in the hairline. This deviation will not result in a natural look. This issue is particularly more noticeable if the patient has coarse hair.

Treatment of hairline with larger grafts – A successful revision of detectable hairlines is not difficult and can be achieved based on the original location of the hairline:

Since a very common miscalculation of early transplants was the placement of grafts containing 2 or 3 hairs along the front row of the hairline, the presence of multi-hair grafts on the hairline is a dead giveaway of an older transplant.

Typically, revision procedures are performed on older hair transplants. However, newly transplanted hair can appear noticeable due to a poor design. In such cases, there is usually a mismatch with either an age inappropriate hairline or a total disregard for the ethnicity of the patient. Unfortunately, hairlines are being designed by inexperienced doctors who overlook the relationship of the hairline to the other landmarks of the face.

Furthermore, when designing the hairline, there are intentional micro and macro irregularities built into the design so that the hairline does not have a “connect the dots with a straight line” appearance. The following are common occurrences with respect to hairline design which may result in an unnatural hairline:

Treatment of an unnatural hairline design can be revised on a case by case basis depending upon the presenting hairline. A hairline revision to reset to a more natural appearance can easily be accomplished in one or two procedures depending on what needs to be done. FUE hair transplantation can remove the unwanted hair follicles from the hairline and relocate them to a proper position elsewhere on the scalp.

Scarring left behind by older hair restoration methods can often be seen in either the donor or recipient areas. A widened liner donor scar is typically seen as a result of FUT (follicular unit transplantation) that was performed via an old strip procedure. The repair/revision of old donor scars can easily be done today using a variety of techniques such as trichophytic closure, FUE into the scar and SMP.