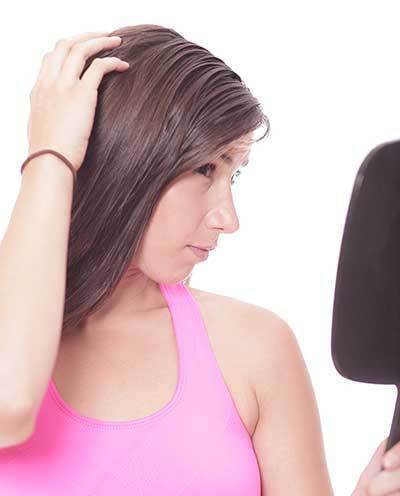 Some Typical Patterns of Hair Loss in Women

The typical progression of women with female patterned hair loss is a diffuse thinning over their entire scalp.  Women who are ideal candidates for a hair transplant may have some thinning at the front, but intact hair on the back and sides of their head.  Most women with female patterned baldness experience more thinning at the top and crown areas of the scalp, while others will have thinning that also impacts the frontal hairline and the frontal corners. The most difficult case of female hair loss to treat is known as Diffused Unpatterned Alopecia, or DUPA, in which the thinning does not follow any specific pattern.  These patients have thinning on the donor areas as well as the front, top and crown.

Other Causes of Hair Loss in Women

Other factors that result in the loss of hair in women are Telogen Effluvium (TE), or temporary shedding of the hair, which is usually associated with termination of pregnancy, side effects to common medications, and medical conditions such as Alopecia Areata and Lupus. There are a variety of other non genetic factors that are known to cause significant hair loss in women.  Some of the most common causes of unnatural loss of hair include harmful hairstyling products, trichotillomania (a psychological condition resulting in the involuntary pulling of hair), and scarring conditions.

Before pursuing a hair transplant, many women should do a basic lab test in order to rule out any medical disorders that are easily treatable. Rogaine (topical Minoxidil 2%) is the most popular medical treatment for women with female patterned baldness.

Hair transplant could be an effective option for many women.  Women who benefit the most from a hair transplant procedure are the ones who have male patterned baldness, since the hair is preserved in the back and sides of the head, and balding or thinning is limited to some areas on the top, crown or front.  Women with a very high forehead are also great candidates for hair transplantation.

Some women may not benefit from hair transplantation because of excessive diffuse thinning in their entire head including their donor areas. These women should discuss non surgical treatment options with their doctor. Women who lost their hair because of other medical conditions need to be treated completely for their underlying condition before proceeding with a hair transplant.