The hair loss condition known as Traction Alopecia is a result of the continuous pulling of hair located in a certain area of the scalp.   The hair loss might not be as large or prominent as the loss caused by other conditions.  Due to the repetitive pulling of the hair roots in a central area, the hair loss tends to be contained to a smaller area. 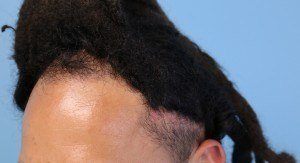 Hair loss on the sides of scalp due to wearing tight dreads.

The recession of the hairline due to chronic traction, or hair pulling, is characterized by a fringe along the marginal hairline on physical exam. (1) (2)

The condition can also be a result of the wearing of tightly fitted safety helmets.  The lining of helmets fitted for sports such as cycling and skiing can cause a constant rubbing motion on certain areas of the scalp. In turn, the pulling and tugging motion created by the helmet can lead to the condition.  Hairstyles that involve long braids can damage the hair roots of a person due to the pulling from the length and weight of the braids. 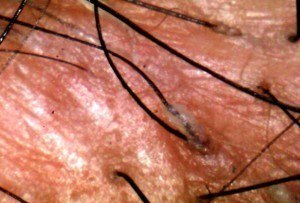 Due to excess traction of hair shafts, the hair follicles are being pulled from the scalp.

The first method of treatment is actually one of the simplest forms of treatment.  Patients are recommended to try different hairstyles and styling habits.

Topical Minoxidil has been shown to reverse the damage caused by the condition in some patients.  It has not been proven to be an effective treatment for all patients suffering from the condition.

It’s important to catch Traction Alopecia with an early diagnosis.  The earlier a patient works to reverse the condition, the less permanent damage there will be to their hair roots.  If none of the treatments above bring about a full recovery, a hair transplant can be performed to restore the hair in balding areas.