Did David Beckham Get a ‘Secret Hair Transplant’? 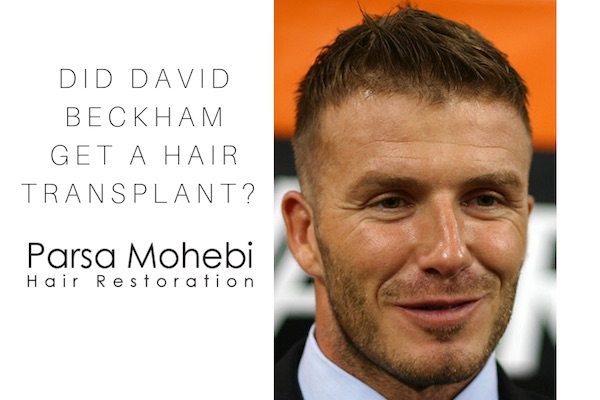 Everyone knows soccer player and fashion icon, David Beckham for having some of the best hair in entertainment. However, a couple weeks ago, The Sun reported rumors that the soccer star had undergone a secret hair transplant. This news came as a surprise to many, as Beckham has long been known for his seemingly-perfect head of hair. Since then, many other articles have come out, speculating the issue and citing evidence that Beckham indeed had a procedure. Such evidence ranges from Beckham covering up his head in public for prolonged periods of time with beanies and hats before revealing a noticeably thicker head of hair in public. However, the question, “Did David Beckham have a hair transplant?” remains at large as David declines to comment on the issue.

How could David Beckham possibly need a Hair Transplant?

Beckham is now 43 years old. For the average man, experiencing hair loss at this age would seem completely normal, but for David Beckham, the stigma of getting hair transplants could potentially hurt his image (and ego). So there’s no wonder that if he did decide to go the route of having a hair transplant, that he would keep it discrete as many other celebrities have in the past.

That being said, it is unclear whether or not Beckham had a hair transplant from the evidence presented. His hair does, in fact, look thicker, but this could be the result of dying his hair or using another hair loss treatment like microfibers or SMP.

Should he be open about his procedure?

Although it still seems to be the norm for celebrities to keep their procedures under wraps, there has been a trend recently of celebs and sports stars to be open about their procedure to the public, which we find quite refreshing!

Do you think that David Beckham should open up to the public about whether or not he had a hair transplant? Would having a hair transplant change your perception about Beckham? Let us know by clicking the link to our recent post on Instagram below and dropping us a comment!

#DavidBeckham has reportedly undergone a ‘secret hair transplant’. Should he be open and honest with the public about having a hair transplant, or should he keep it a secret? Let us know what you think in the comments! #CommentBelow 👇