President Donald Trump’s hair has long been a focus of attention from the general public, as well as a popular topic on our blog. In recent headlines, his hair has been brought to the center of attention once again, thanks to a new book titled, Fire and Fury: Inside the Trump White House.

The book alleges that Trump’s daughter, Ivanka, leaked secrets about her father’s hair to her friends. The secrets behind Donald’s infamous hair include getting a scalp reduction surgery, as well as using Just for Men to achieve his signature hair color. Both of these ‘secrets’ provide valid explanations behind the look of our President’s unique hair.

It’s no secret that Trump’s hair is style is irregular, but what is it exactly that causes it to look this way? A scalp reduction surgery could explain. The author of the book, Michael Wolff, detailed Ivanka’s description of how the scalp reduction affected the look of her father’s hair as follows, “She often described the mechanics behind it [Donald’s hair] to friends. An absolutely clean pate – a contained island after scalp-reduction surgery – surrounded by a furry circle of hair around the sides and front, from which all ends are drawn up to meet in the centre and then swept back and secured by a stiffening spray.”

Scalp reduction is a very aggressive surgical procedure in which the balding scalp is surgically removed and the rest sutured. It is a temporary solution to hair loss, and typically results in patients balding further and a big scar at the middle of their scalp that can’t be covered (see photo below). That is why Donald Trump has to do his typical comb over to cover the scar he has on the top of his scalp. 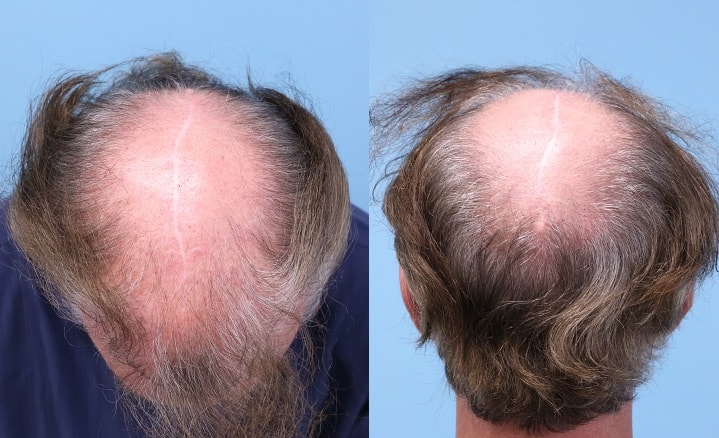 The Hair Color – Just For Men

Just for Men is a shampoo-in treatment meant for hiding grey hairs. The longer you leave it in, the darker your hair is supposed to get. According to Ivanka, the signature orange-blond color comes from Donald not leaving the treatment in for long enough.

The good news for Donald could fix the look of hair if wanted to. It is very common for patients to get an FUE procedure after getting a scalp reduction surgery. Especially in his case, where it seems he has enough donor hair, he should be able to achieve a full head of real hair and hide the scar from scalp reduction surgery with an FUE.