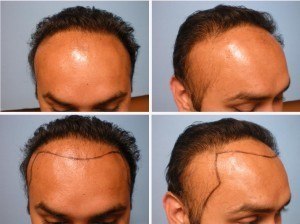 Turban Alopeica due to chronic use of turban and knotting hiar – Bottom: hair line design before hair transplant surgery

Turban Alopecia is a type of traction alopecia that is seen in people who wear tight turbans, such as Sikhs.  Turban Alopecia can also occur as a result of knotting and braiding long hair which results in hair being pulled continuously for long periods of time.  This can cause hair loss with the same mechanism as many other types of traction alopecia – chronic pull on hair follicles can destroy them permanently.

Prognosis of Turban Alopecia is similar to other types of traction alopecia.  It might be reversible to some degree only in some patients.  However, if re-growth is not seen after a year of stopping the use of the turban and tight hair braiding, it is unlikely that new growth will occur at all, leaving the affected areas of the scalp with permanent hair loss.

Turban Alopecia is generally seen in the frontal area of the scalp and in some cases in temple areas.  Those are the areas that are directly affected by the traction effect of the turban and hair braiding.  (This could be seen in most members of a Sikh family.)  Unlike the more common androgentic alopecia, which is a genetic predisposition to hair loss, Turban Alopecia is not genetic, but being predisposed to familial male patterned baldness is an accelerator factor and can cause occurrence of male patterned hair loss prematurely.

The risk of traction alopecia in Turban Alopecia type could be reduced by not knotting or braiding the hair and by wearing turbans more loosely. But for those who have experienced permanent hair loss due to Turban Alopecia, there is a natural and proven treatment option available through surgical hair transplantation. (It will be important to control hair braiding and tight turbans following hair transplantation to insure continued hair growth in these areas.)