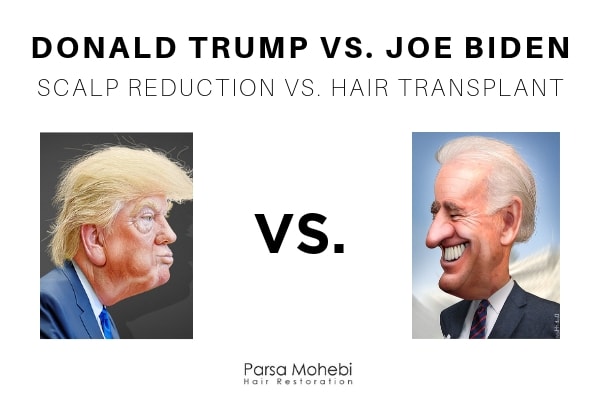 There is no love lost between the current President, Donald Trump, and the Democratic presidential candidate for the 2020 election, Joe Biden. From their claims of being able to best each other in a fight to this bizarre tweet from Trump that mocked Biden, it is safe to say these two men do not like each other.

In the midst of this strange, yet entertaining, quibble between these two political giants, we can’t help but focus on both of their hairstyles. Although the two men are different in many ways, they share one thing in common: being follicly challenged.

In previous articles, I have written about the importance of good hair for US Presidents. Since the first televised debate featuring John F. Kennedy in his quest to win the election, Americans have never elected a bald president, despite the fact that about 60% of adult males have some degree of hair loss that requires treatment.

Thanks to his daughter revealing his medical history, Donald Trump is known for his scalp reduction. Of course, he is perhaps most well-known for his signature comb-over which has prompted a lot of speculation as to what he has been trying to hide. What is he trying to cover? Trump’s hair loss and comb-over have been extensively covered in the media for years. The interest in the topic peaked during the presidential debates in 2016 when Hillary Clinton and Trump used hair as a subject to attack and ridicule each other in many instances. His comb-over could cover the scar of his scalp reduction. It can also cover the scar in front of his hairline due to a flap surgery. Flap surgeries are not done anymore thanks to the advanced hair restoration procedures that are available to us. In the past, we used to bring a strip of hair baring skin from the donor area on the back of the scalp to the front of the hairline. The flap was rotated, with its original blood vessels, to bring a band of very thick hair to the hairline. The problems with the flap surgery included an unnatural orientation of hair, a visible scar and the fact that the density of hair on the hairline was unusually high despite leaving a large balding area immediately behind them. 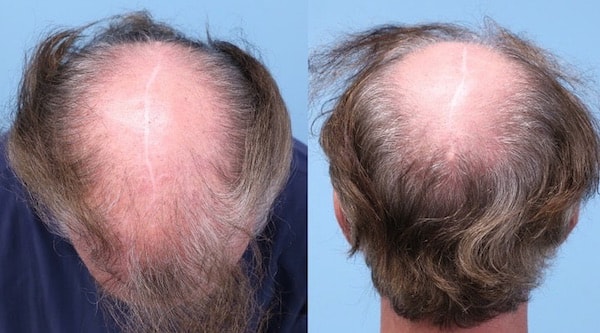 On the other hand, we have Joe Biden who is known for having a hair transplant in the past. His pictures from back in the day show evidence of a high class of hair loss (Class VII in Norwood Classification). Despite his advanced hair loss, he seems to have a reasonably good hairline in front. The reason that he does not have enough coverage on his crown could be that he does not have enough donor hair to restore his big balding patch or he decided to leave the crown bald for another reason. Proper planning for people with advanced hair loss could avoid them having a bald patch despite a very youthful hairline. In an ideal situation, his hairline should have been placed more posteriorly. We call that a mature hairline that is not unusual among Caucasian men over 50 years of age. By creating a higher hairline, we can save more hair follicles that could be used in the crown area. Even if the crown could not be completely restored, having a lightly covered crown looks more natural along with a more mature hairline. That is what we see in nature. We generally don’t want to see a juvenile hairline with a huge balding patch on the crown.

When considering the importance of having a good head of hair when becoming president, it stands to reason that a candidate will want to look as appealing as possible.

Both men have experienced hair loss and have taken steps to restore their hair. It is a matter of personal opinion regarding which candidate looks better. Will the American public elect a head of hair that appears full, even though it has received some procedures and uses a comb-over, or will they chose a hair transplant patient who proudly shows his hairline with a large area of baldness on the crown?

We will have to wait until November to find out!