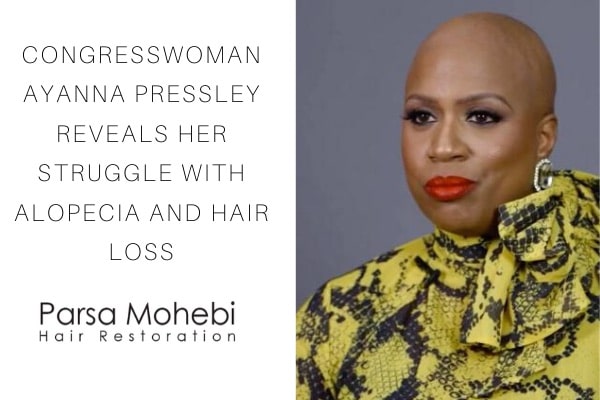 Although women’s hair loss is very common, unfortunately, it is still stigmatized and not discussed as much as men’s hair loss. In our last blog post, we discussed talk show host Ricki Lake’s struggle with hair loss. Soon following the break of her story, another brave woman in the public eye has come forward to shed a light on her story with alopecia and hair loss.

Congresswoman Rep. Ayanna Pressley of Massachusetts recently announced to the public that she has been living with alopecia and hair loss – most likely caused from her signature hairstyle. In an emotional video, she revealed the impact her hairstyle has had on her identity over the years, and therefore, how devastating the effects of losing her hair to alopecia has been.

According to Pressley, she had only shown herself without a wig to those closest to her. By being transparent and revealing her struggle with alopecia to the public she hopes it will help her come to terms with her condition, as well as help others facing the same condition cope as well. She explains, “I want to be freed from the secret and the shame that that secret carries with it. And because I’m not here just to occupy space; I’m here to create it. And I want to be free.”

Have a look at the video that originally appeared on The Root and read the full transcript below:

“This is my official public revealing. I’ve only been bald in the privacy of my home and in the company of close friends. I’m Congresswoman Ayanna Pressley, And this is a word about why my black hair story is both personal and political.

Before I was an elected official, I did everything. I wore wigs, I wore extensions. And then about four or five years ago, I decided to get Senegalese twists all the way down to my waist. And what happened is that I got these Senegalese twists, and I feel like I met myself fully for the first time. I sort of looked in the mirror and I said, “Oh, there I am.” And it felt good. So what started out as a transitional hairstyle ultimately became a statement, and something that I was very intentional about. And I was very aware this hairstyle would be filtered and interpreted by some as a political statement that was militant. Or people said, “People will think you’re angry.” And I said, “Well, they already think that.”

What I was not prepared for was the glorious gift and blessing of the acceptance and the community and the affirmation. Now, I walk into rooms and little girls are wearing t-shirts that say, “My Congresswoman wears braids.” And we receive letters from all over the globe of women who talk about their own emancipation; that they feel that I’ve given them permission. My twists have become such a synonymous and conflated part of not only my personal identity and how I show up in the world, but my political brand. That’s why I think it’s important that I’m transparent about this new normal and living with alopecia.

In the fall, when I was getting my hair re-twisted is the first time that I was made aware that I had some patches. From there, it accelerated very quickly. I had been waking up every morning to sink fulls of hair. Every night I was employing all the tools that I had been schooled and trained in throughout my life as a black woman, because I thought that I could stop this. I wrapped my hair, I wore a bonnet, I slept on a silk pillowcase. And yet and still every morning, which I faced with dread … I did not want to go to sleep because I did not want the morning to come, where I would remove this bonnet and my wrap and be met with more hair in the sink and an image in the mirror of a person who increasingly felt like a stranger to me.

And so impeachment Eve, the last little bit of my hair came out. I was completely bald. And in a matter of hours, was going to have to walk into the floor, the House Chamber, The House of Representatives and cast a vote in support of articles of impeachment. And so I didn’t have the luxury of mourning what felt like the loss of a limb. It was a moment of transformation, not of my choosing.

It is with a heavy heart, but a resolved one, and because I believe our democracy is worth fighting for, I will vote to impeach Donald J. Trump, and I urge my colleagues to do the same.

But I knew the moment demanded that I stand in it and that I lean in, and I exited the floor as soon as I could. And I hid in a bathroom stall. I felt naked, exposed, vulnerable. I felt embarrassed. I felt ashamed. I felt betrayed. And then I also felt that I was participating in a cultural betrayal because of all the little girls who write me letters, who come up to me, who take selfies with me, #TwistNation. And I thought of those t-shirts and I just kept revisiting that.

And I immediately knew that I was going to want to, when I felt ready, go public. Because I felt like I owed all those little girls an explanation. My husband says I don’t; that everything doesn’t have to be political. The reality is that I’m black, and I’m a black woman and I’m a black woman in politics, and everything I do is political. I think you might overly intellectualize it and say it’s just hair. People are well-meaning and have been reminding me of the India Arie song, I Am Not My Hair. You are not your hair. And that’s true, but I still want it. So I’m trying to find my way, here. And I do believe going public will help.

This is my official public revealing. I’m ready now because I want to be freed from the secret and the shame that that secret carries with it. And because I’m not here just to occupy space; I’m here to create it. And I want to be free.

I am making peace with having alopecia. I have not arrived there. I am very early in my alopecia journey, but I’m making progress every day, and that’s why I’m doing this today. It’s about self-agency. It’s about power. It’s about acceptance. Right now on this journey, when I feel the most unlike myself is when I am wearing a wig. So I think that means I’m on my way.

I’ve been experimenting, and so I have several units. One, I call FLOTUS, because it feels very Michelle Obama to me. This one, I call the OG, because this was the first one. I’m trying to get to a place where I give myself the space to be, to find joy in options.”

According to Dr. Mohebi, “Traction alopecia is a common condition among African American women who wears braids. The hair loss from this condition is a result of the continuous pulling of hair located in a certain area of the scalp.”

He continued to explain that it is, “great that some people with hair loss are brave enough to talk about their hair loss and hair restoration solutions. Hair loss is a real problem that can affect many aspects of the lives of its victims. The good news is that modern hair restoration gives us many options to treat the majority of hair loss conditions.”

Here at Parsa Mohebi Hair Restoration, we invite public figures struggling with hair loss to a complimentary, full range of hair loss diagnostics and Hair restoration treatment options in an effort to help spread awareness to the public that restoring their hair is an option!