Simplified Hairline Design – A Focus on Shape and Position 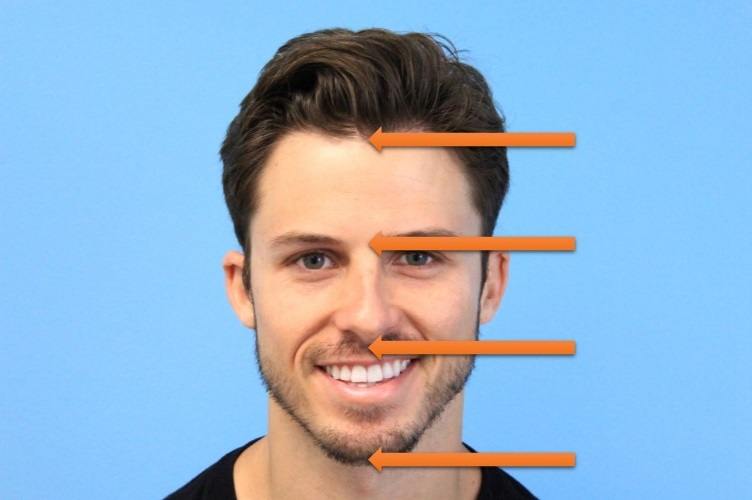 Hairline design is one of the key elements of a hair restoration procedure. In most cases, knowing how to create a natural looking hairline is essential for hair transplant surgeons.

A good-looking face is often also considered to be a proportional face. We can see a special proportion in the face of most good looking men and women. What we want to achieve with most patients is a face that is divided proportionately in three sections.

The distance between the tip of the nose to the bottom of the chin should be about the same as the hairline to the point between the eyebrows. This happens to fall to 7-8cm in most men. The creation of a hairline at the midline position of the forehead is what restores the proportions of the face in a good-looking man.

Planning of graft placement for a patient with Class VI male patterned baldness – Left: Creation of a mature Caucasian hairline with mildly receded corners – Right: The final hairline location with micro-irregularities and planning for density distribution based on the priorities

At times, we may go against this rule because of any limitations we might have in the donor hair of the patient such as fine hair and low density. Whenever possible to restore this with an adequate number of hairs, this rule helps patients achieve the most pleasing aesthetic result. When the patient’s hair is fine, or the density of donor hair is suboptimal, especially in patients who are going towards advanced classes of hair loss, we may decide to elevate the hairline in the front and even more on the corners. This works perfectly in those individuals with a shortage of hair. A crown area that is thinner than normal goes hand in hand with a hairline that looks receded from its juvenile position.

A successful hairline design involves many steps including:

Designing a mature male hairline – Before and after hair transplant

In comparison to a male hairline, women generally have the corners of their frontal hairline flat or lowered. This still falls into the category of proportional faces following the rule of thirds for vertical proportions at the middle. However, on the sides, the horizontal proportions should be considered and the corners will be closer in a typical female hairline. Some women may have lateral humps that lower the hairline on both sides of the midline that falls into the definition of a feminine hairline. The most important alteration that should be followed for a female hairline is the lack of hairline recession on the sides (corners) of the frontal hairline. The other optional alternations that should be considered when designing a female hairline, based on the shape and position of the other components of the face, are:

A surgeon should always follow these basic formulas when designing a hairline in addition to considering the relationship between different landmarks of the face in order to achieve the best aesthetic results.