Balding and its psychological impacts has been the subject of many studies in the past. The relationship between hair loss and stress is clear to all clinicians who practice in this field. Negative psychosocial impacts of hair loss in male patterned baldness and in women with generalized thinning have also been seen. Many of us (hair transplant surgeons) have seen the negative effects of hair loss on self esteem and self-image.

We know that hair loss impacts some men sex life and their stability with regard to career choices in men of different ages. Despite the solid evidences and published literature on psychological impact of hair loss, the corrective effect of medical and surgical hair restoration has never been studied. After observing the drastic changes in patient behavior and the high level of patient satisfaction in those who had hair transplant procedure, we were motivated to look into the psychological impact of hair restoration on different aspects of a patient‚Äôs life. 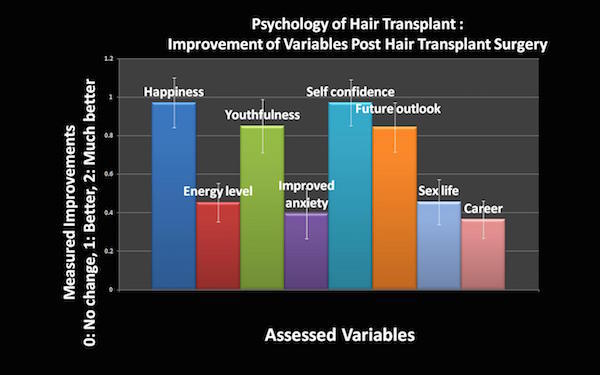 We came up with a series of criteria that could have been modified by having a hair restoration procedure; we used some indexes that were previously studied comparing bald and non bald men on different psychological variables. We initially performed a pilot study and asked patients about different aspects of their lives during their post op visits. We gave our patients open ended questionnaires and probed their psychological state after their hair restoration procedure was complete. Eventually we focused in on eight major criteria that have been reported and documented as variables associated with hair loss in the literature. We collected a subset of them in our pilot study. Included were questions on the general level of happiness, energy level, feeling of youthfulness, anxiety levels, self confidence, outlook on their future and impact on their sex life.

We have chosen the patients who had their first hair transplant surgery between one to three years from the time of our study, so they had seen the final result of their hair restoration procedure. We limited the study to male patients with male pattern baldness and the ones who had surgeries less than three years ago so they still had a fresh memory of the changes they experienced. Each patient had exclusively follicular unit transplants that reflected our standard of care for that period. We sent a questionnaire with a brief description on the nature of this scientific study. We did not collect any patient identifiers and the response was totally voluntary. We sent the two hundred questionnaires with stamped return envelope.

The response rate to our questionnaire was 37 (18%). Each patient was used as his own control since we asked about the changes that they experienced after surgery in comparison to those variables before the surgery. We used T-test to compare patient‚Äôs responses. Table 1 shows the mean and standard error in eight different criteria that were asked. Patients had significant improvements in all eight criteria regardless of their stage of baldness and their ages.

In another attempt to compare psychological changes that patients experienced in different stages of baldness, we divided patients into two groups: (1) those who had Norwood IV patterns or less and (2) the ones with Norwood V patterns and above. We observed the most significant difference in two categories, (a) sex life and (b) career experience. Patients with less balding had a greater impact on their sex life and career when compared to patients who had more advanced stages of hair loss. These changes were not age related.

Hair restoration surgery can affect many aspects of a patient’s life. Hair transplant can potentially reverse psycho-social problems associated with hair loss. The positive impact of hair restoration surgery is more visible among patients who suffer from those undesirable effects the most. In early stages of hair loss, patients may have more awareness of their condition and they might be more affected than men in the later stages of hair loss.

Patients who experienced hair loss at an early age while involved in an active social life were more prone to the negative side effects of balding. That could explain why younger people with hair loss appeared more benefited by hair restoration procedures. Also it could be assumed that hair loss can have a negative impact on a patient’s outlook which seems to reverse after receiving a hair restoration procedure which improved their outlook.

Low response rate from a blind mailing has always been a drawback in questionnaire studies. We received 37 out of 200 of the questionnaires that we sent out (response rate was 18.5%). Giving incentives to responders may be a good way of increasing the participation rate of any questionnaire studies. We presented the result of this study at the annual scientific meeting of ISHRS and have been contacted by many of our colleagues who expressed interest in collaborating in a larger scale study. We are currently trying to rise funding for repeating this study to optimize our response rate and the statistical value of the study.

If you have any questions on the content of this article you can contact Parsa Mohebi Hair Restoration office at Los Angeles through email at info@parsamohebi.com or phone.