The 21st Annual meeting of ISHRS was held in the Regency Hotel in San Francisco. The meeting was very productive with many useful presentations and scientific involvements.

This year the general session had many lectures on FUE transplant and the newest innovations in the field of hair restoration. 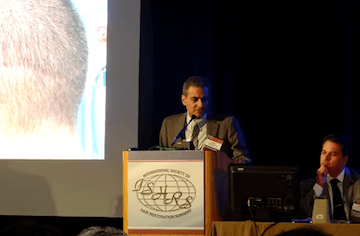 I presented a novel method in management of donor wound in strip hair transplant. I have called this method, “Partial Trichophytic Closure” in which a traditional trichophytic closure is performed on the upper edge of the wound, while the lower edge is examined microscopically and only sections that have hair follicles with distal transection are de-epithelialized.

The advantage of this method is that the scar will appear smaller, because of the possibility of transected hair at the edges. This is the first time that this method has been presented in any medical meeting.

Among the interesting lectures, Dr. James Harris reviewed the FUE Research committee and its goals. He named the hair transplant surgeons who helped shape the current state of the art FUE techniques.

Dr. John Cole, the other hair transplant surgeon and member of FUE Research Committee commented about different punch sizes based on the classes of hair loss. He also reviewed the transection of hair follicles and in which situations we can be generous with our transections.

One of the interesting subjects discussed was the novel method in hair restoration presented by Dr. Carlos Wesley. Dr. Wesley introduced an endoscopic method for removing hair follicles. He called this method Piloscopy. Piloscopy is a tool that helps remove hair from below the skin surface. This device removes the grafts from inside which, unlike current techniques of hair restoration, can minimize the hypopigmentation at the skin level.

Dr. Wesley is still working on the mechanics involved with this procedure as well as evaluating the scarring that may happen underneath the skin secondary to this procedure. 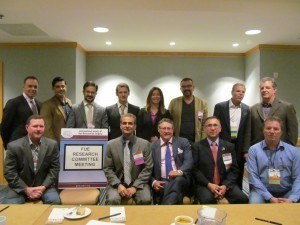 The FUE Research Committee held its second annual meeting in which its achievements from the first year were discussed. The committee also discussed the plan for the coming year including its two major projects. The initial project, which compares the strip vs. FUE hair transplantation, will be launched soon. The second project of the FUE Research Committee will focus on the role of transection in FUE hair restoration. The committee discussed the details of the second study, which will also be launched soon.

As a tradition of the ISHRS Society, the Award Ceremony was held on the last night of the meeting. The winners of the golden and platinum award were announced.