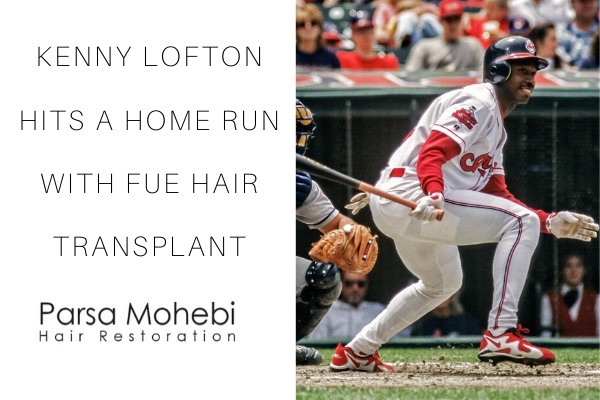 Kenny Lofton is a former major league baseball player that is often in front of the public thanks to his work as a TV commentator as well as his work with his own production company. Because of his busy public appearance schedule, Lofton is concerned about looking his best on camera and this includes the appearance of his hairline. Over the past few years, Lofton had noticed a receding hairline and was afraid he would have a lifetime of baldness ahead of him. Rather than wait for his hairline to continue receding, Lofton decided to take action and get the hairline he desired.

Kenny Lofton’s research into experienced and board-certified hair restoration surgeons led him to the offices of Dr. Mohebi. Having treated hundreds of celebrities in the past, Dr. Mohebi instantly understood the importance of his look to Kenny since Kenny Lofton is in front of cameras on a regular basis.

Dr. Mohebi performed a FUE hair transplant which is a hair restoration procedure where the hair grafts are individually removed from the donor area on the back or sides of the scalp. If there are not enough hair grafts available to move from the donor area to the balding area, a hair transplant surgeon can take the hair from other areas of the body such as the beard or the back.

Kenny Lofton will be the first to admit that the phrase “hair transplant” can be kind of frightening if the patient is not aware of everything that is involved in the hair transplant process. Once he had his consultation appointment with Dr. Mohebi, Lofton compared the process to being the same as a person simply pulling out their own hair in order for the hair to be transplanted or placed in another area of the body. The consultation appointment can often be the turning point of taking the mystery our of hair transplants for a patient. This was the case with Kenny Lofton as he was able to visualize the steps involved in the hair transplant process and better understand what will happen with his hair as well as how long it will take for the results to become visible.

As his hairline has continued to grow and the look he desires for his hairline is becoming a reality, Kenny Lofton is very pleased with the results he is seeing with his hairline. The final results of FUE hair transplant can take anywhere from 12-18 months to become visible so he can expect to see a continuing improvement and evolution in the appearance of his hairline over the next several months.

One thing that is certain is the fact that Kenny Lofton is very pleased with the changes and improvements in his hairline. Since he is a former MLB player, it can even be said that Dr. Mohebi hit a home run with Kenny’s hairline!