Home >> Is There A Baldness Cure In The Near Future?

Is There A Baldness Cure In The Near Future?

An overall cure for baldness doesn’t exist yet and it might be many years before it actually happens. However, a team of researchers from Columbia University Medical Center are taking steps towards finding a cure for baldness. According to research published in Science Advances in October 2015, the Columbia University Medical Center research team has been conducting a number of experiments that show JAK inhibitors (an enzyme-blocking drug) can cause regrowth of hair when it is applied to the skin.

What does this mean for patients who currently suffer from baldness? The findings indicate that there is a chance in the future that the JAK inhibitors can be used to help promote hair growth in both men and women who are balding or who suffer from hair loss as a result of chemotherapy.

Dr. Angela M. Christiano, associate professor of dermatology at the center and also the research team leader, said that the results from the research are promising. However, she cautions that more work is necessary in order to test if the JAK inhibitors will be able to promote human hair growth using formulations that are made for use on the scalp. Christiano and her team were conducting research on alopecia areata when they made their discovery.

JAK inhibitors that were applied to the skin of a group of mice with shaved bodies grew more hair than a group of mice given an oral form of the drug. These results suggest that the drugs were directly affecting hair follicles. Also, mice treated for a five day period with ruxolitinib and tofacitinib (JAK inhibitors) grew hair within 10 days. The hair of the group of untreated control mice did not grow during the same five days. 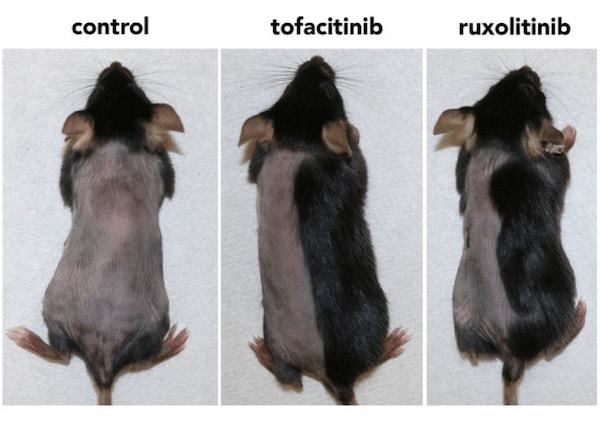 Christiano says the next step in the process is to conduct clinical trials. Even with the promising research, it could still take four or more years before any drugs from the research become available to the general public to help treat hair loss.