Seoul, South Korea was the host of the second Annual Meeting of Asian Association of Hair Restoration Surgery (AAHRS), which was held in May 2012. The president of AAHRS, Dr. Sungioo “Tommy” Hwang did an exceptionally commendable job organizing the meeting along with the president of Korean Society of Hair Restoration Surgery Dr. Jung-chul Kim. The meeting was well planned with many well researched and presented lectures including presentations on the advanced techniques of hair restoration surgery such as FUE transplants with new automated devices and hair multiplications methods.

I had the privilege to be one of a select group of medical professionals invited to serve as faculty from the United States. This provided me an opportunity to give two presentations. The first discussed the safe method of hair transplantations and secondly the use of Laxometer and its benefits to patients and the advancement provides in increasing the safety of hair transplant procedures.

Dr. Parsa Mohebi was one of the invited faculties from U.S. for 2012 AAHRS meeting in Seoul, South Korea..

Some of the other interesting topics were on the characteristics of patterned hair loss in Asians by Dr. Won-Soo Lee from Korea and female alopecia by Dr. Seok-Jong Lee. The topics related to the ethnic hair loss and the ethnic hair restorations were among my favorite subjects since at Parsa Mohebi Hair Restoration we have a diverse group of patients in our California Centers including patients of Asian and Middle Eastern ethnicity.

Another interesting topic that was presented was the “Baldness Gene”. It has been hot subject in the field of hair restoration in last few years. Many people have been focused on the gene therapy techniques in hair restoration or the use of stem cell research in hair multiplications in last decade. 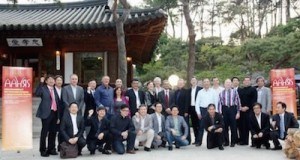 Dr. Moon-Kyu Kim had a very elaborate lecture on “Baldness Gene” in which he discussed the paradoxical effects of androgen hormones on hair growth. Dr. Kim and his group compared the gene expression difference between frontal and beard Dermal Papilla after stimulation with DHT. They proved that the protein DKK-1 is being regulated differently in different area that can be one of the pathways involved in male patterned baldness.

Dr. William Rassman was another USA hair transplant surgeon invitee to the AAHRS Annual Meeting. Dr. Rassman discussed his innovative method of Scalp Micropigmentation (SMP) as a useful method to hide baldness in particular patients. He discussed the advantages and disadvantages of the techniques and presented several before and after pictures of the patients with hair loss who were treated with scalp micropigmentation.

Dr. Ali Abbasi, one of the pioneers of hair restoration surgery in Iran, presented the safe methods of removing strip in hair transplant surgeries including the techniques of measuring scalp laxity and the use of the Laxometer. Dr. Jerry Wong who is one of the leading hair transplant surgeons who performs gigasessions also stressed the importance of proper measuring of scalp laxity before performing the surgeries to increase the number of grafts while enhancing the safety of hair transplantations.

Dr. Jack Min Yu from China discussed the intricacies of beard FUE Transplant and the do’s and don’ts of such a procedure. I found this particularly interesting and his research was mostly aligned with what we discovered in our practice.

I would like to express my appreciation to the organizers from Asian hair transplant surgeons for their great hospitality and in particular to our Korean host surgeons who were involved in organizing the session. During my stay in Seoul, I had a chance to see a few historical locations in the city and become more familiar with this beautiful country and its great history. I look forward to the following meetings of the Asian Association of Hair Restoration Surgery in the future.