Home >> What Group Of Men Is More Likely To Go Bald?

What Group Of Men Is More Likely To Go Bald? 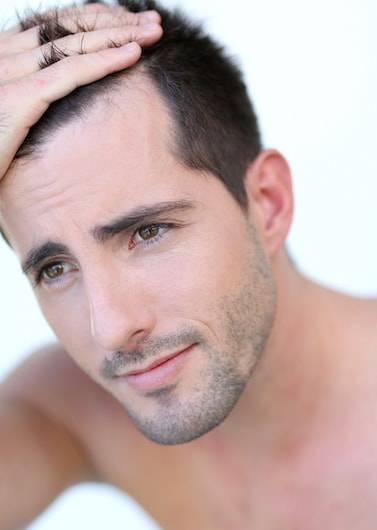 It’s been said that hair loss doesn’t discriminate and that it can impact almost anyone. However, a study earlier this year suggests there is one group of people who might be more likely to have some amount of hair loss.

Who is this group of people???

According to research published earlier this year in Nature Communications, white men on the shorter side of the size spectrum might have a greater chance of male hair loss than other men. The research studied and identified genetic associations among such factors as greater rates of premature hair loss, earlier occurrences of puberty, reduced body size and some cancers.

The authors of the study used a global group of 12,000 men without hair loss and 11,000 men who have premature baldness. According to Dr. Stefanie Heilmann-Heimbach of the University of Bonn, “We were thus able to identify 63 alterations in the human genome that increase the risk of premature hair loss.”

In the same press release that quoted Dr. Heilmann-Heimbach, Professor Markus Nothen, director of the Institute of Human Genetics at the University of Bonn, noted that the analysis of genetic associations also pinpointed links that exist between light skin color, increased bone density and premature baldness. Dr. Nothen said that the links indicated that males with hair loss are better equipped to use sunlight as a way to synthesize vitamin D and that it could also explain why white males seem to lose their hair more prematurely than other men.

Despite their findings, the research team did say that additional studies will need to be conducted before any final conclusions can be made regarding shorter white males being more prone to hair loss.