Gold Chains in the Scalp – A Hair Transplant First

A hair transplant is exactly what the name of the procedure says: Hair is transplanted from the body of the patient into the balding or thinning areas of the scalp. However, a rapper recently took the idea of a hair transplant to an entirely different (and unexpected) level by having gold chains placed in his scalp rather than hair grafts from his body.

Dan Sur and His Golden Head 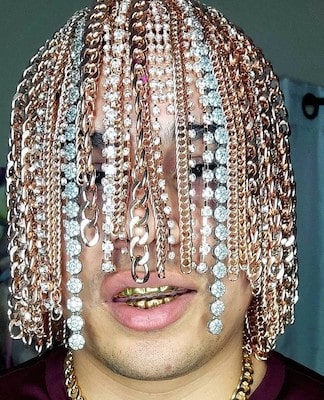 Dan Sur is a 23-year-old rapper, and his new look is one that has caught many people by surprise. He claims to be the “first rapper…in human history” to have gold chains implanted into the scalp to serve as his “hair”. In other words, he now has gold chains that are hanging from his scalp. The gold chains hang from hooks that Dan Sur had surgically implanted into his scalp.

The rapper has 1.9-million followers on TikTok which is where he has been discussing his decision to have the gold chains placed in his scalp. “The truth is that I wanted to do something different because I see that everyone dyes their hair. I hope not everyone copies me now.”

The dozens of gold chains were put in place back in April and some of the chains are even encrusted with bling. “I have it as a hook that is implanted in my head and that hook has hooks and they are all hooked in my skull, under my skin. This is my hair. Golden hair. The first rapper to have gold hair implanted in human history.”

Inspiration behind the Golden Hair of Dan Sur

The reason behind his decision to have gold chain hooked into his scalp has been debated by the media. Some media outlets are sharing the opinion that Dan Sur was inspired by another rapper, Lil Uzi Vert, who went viral earlier this year by having a “natural” pink diamond embedded into his forehead. It is estimated that he spent 24-million dollars on the diamond.

FYI: Lil Uzi Vert might be reconsidering that idea as he claims a fan ripped the diamond out of his forehead at a music festival in July. He was able to make his way into the crowd and retrieve the diamond. As he told TMZ, “I’m feeling good. I still have the diamond, so I feel good.” Even though there have been some comparisons between the gold chains in the scalp and the diamond in the forehead, Sur considers his golden locks to be a unique idea.

While the idea to have gold chains placed in the scalp is certainly interesting and unique and one that is hard to miss, the majority of people interested in having a hair transplant simply want to have normal hair growth as the final result of their procedure.

During Follicular Unit Extraction (FUE) hair transplant, the hair grafts that are transplanted into the scalp are individually removed from the donor area on the body. The donor area is usually the back and sides of the scalp as the hair in this area of the body has been shown to be resistant to balding.

If there is not enough high-quality donor hair on the back and sides of the scalp, the surgeon will then take hair grafts from other areas of the body. Some of the most popular choices include the hair that is found in the beard and the chest of the patient. Since the hair grafts are removed individually from the donor section of the body, there is not a linear scar that can make it obvious to others that a hair transplant was performed.

The hair grafts are placed inside premade incisions in the scalp in order to give the patient a fuller hairline and a greater amount of density when it comes to their head of hair. The hair grafts are not just randomly inserted in the scalp. They are strategically placed so they are able to effectively match the natural curvature of the hair of the person.

Patients will see an early amount of hair growth within two or three months and the final results will become visible within 12-18 months.

Anyone that is interested in learning more about the hair transplant process is invited to contact our office today to schedule a consultation appointment. During the appointment, our medical team will examine the current hairline of the person as well as perform tests to determine the cause of the hair loss. Our doctors will also discuss the reasons why the person wants to have a hair transplant and the desired final results of the patient. It is important to set realistic expectations when it comes to the final results so the patient will have a clear idea of the hair growth they can expect when it comes to their hair restoration procedure.