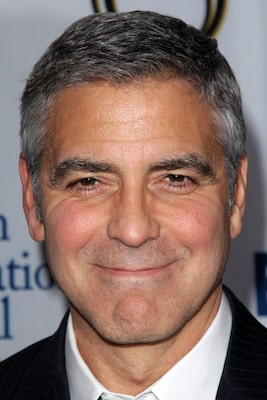 As you can see in this picture, the front of George Clooney’s hairline looks “see through”. Could his famous strong hairline actually be the result of a hair transplant?

Thank you for the interesting question!

After viewing the photo, there are two possibilities about why George Clooney’s hairline may have some sort of “see through” effect:

George’s salt and pepper hair color has definitely worked to his advantage and helped him maintain the look of a full head of hair until now. If his hair color was actually a darker color, his thinning on the scalp would be much more obvious to the public.

In my professional opinion, I think Mr. Clooney is going to need a hair transplant sooner (rather than later) if he wants to keep a solid hairline like the one he had before. He would be a great candidate for our Celebrity FUE Hair Transplant™ by Dr. Parsa Mohebi procedure for hairline reinforcement.