DHT inhibitors like finasteride and dutasteride can help with hair loss prevention. Scientists have found a relationship between these drugs and COVID-19. DHT blocker medications are also known as 5-alpha reductase drugs. The medication may alter the pathway that the virus uses to enter the target cells or it may work through other mechanisms. We know that patients who have used these medications have done better after being diagnosed with COVID-19. Can it be considered or used as a treatment option for this disease? To answer to this question, we will go in-depth about our current status with the pandemic and what the study really means (for those of you who love details about scientific studies). 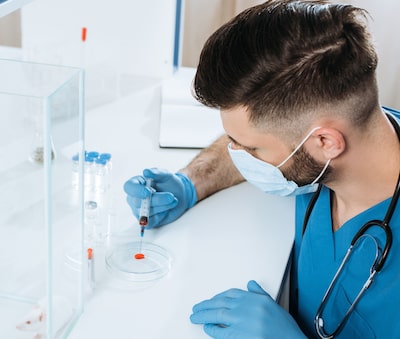 The ongoing COVID-19 pandemic is nearing what many hope will be a breakthrough in finding a cure for the disease. The possibility of a vaccine for COVID-19 has been discussed for months. A Centers for Disease Control and Prevention panel is scheduled to vote this week on who will be the first people eligible to get the coronavirus vaccine. In addition, Moderna has requested emergency clearance from the Food and Drug Administration for its COVID-19 vaccine. Moderna applied for their emergency clearance after Pfizer applied for authorization back in November.

While the first doses of one of these vaccines are expected to be distributed before the end of 2020, a recent study shows 5-alpha-reductase inhibitors work to reduce the remission time of COVID-19. The results come from a randomized, double blind, placebo controlled interventional trial conducted on 130 SARS-CoV-2 positive men.

The Background Behind the Study

The entry of SARS-CoV-2 into type II pneumocytes depends on the proteolytic enzyme known as TMPRSS2. The promoter of this enzyme in humans is an androgen response element which means androgen sensitivity could be a possible risk factor for COVID-19.

Given the above information, the study was conducted to determine if 5-alpha-reductase inhibitors can be considered to be a beneficial treatment if they are given to a patient after a SARS-CoV-2 infection.

How the Study was Performed

The study was conducted as a double-blinded, prospective, investigative study of dutasteride, which was also randomized, for the treatment of COVID-19. The subjects in the study were people confirmed as being positive for SARS-CoV-2 and treated in an outpatient setting.

The Study and how it Relates to Hair Loss

Patients that are suffering from hair loss might be curious to learn how the above study relates to the loss of hair on the scalp.

Dutasteride and finasteride are the two most frequently used 5-alpha-reductase inhibitors. These medications are used to inhibit the conversion of testosterone into dihydrotestosterone which is the androgen that causes male pattern baldness. Finasteride has been FDA approved for treatment of male patterned baldness. Even though dutasteride is approved as a male pattern baldness treatment in some countries, it has not yet received the approval of the FDA for use as a hair loss drug in the United States. Instead, it is approved by the FDA as a drug to combat prostate enlargement. It can only be prescribed as an off-label treatment option for hair loss.

Patients interested in learning more about dutasteride, as well as other hair loss prevention methods, are invited to contact our office to schedule a consultation appointment with one of our experienced and board-certified doctors.