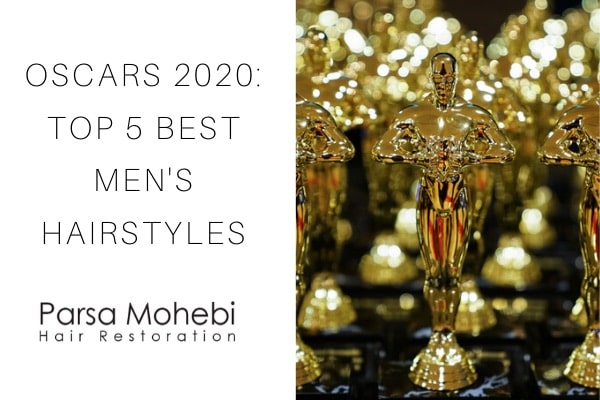 Every year, the most famous celebrities in entertainment gather at the Academy Awards to honor the highest achievements in film. At the event, they show off the in fashion and set the standard for what is ‘cool’. At Pars Mohebi Hair Restoration, we love to see what our favorite celebrities wear to the event, but naturally, we can’t help but focus on which celebrities have the best hair – and this year they did not disappoint! Below, we’ve shared our top 5 favorite men’s hairstyles from the 2020 Oscars (It just so happens that they all took home Oscars, as well!).

Not only did Cherry sport a great head of hair to the Oscars this year, but he also took home an award for his film, ‘Hair Love’, which is about an African-American father doing his daughter’s hair. One of the story’s main messages was to embrace and love your natural hair. Of course, we couldn’t be happier to see a film with such a message take home the award for the Best Animated Short Film! Have a look below at Cherry accepting the award along with producer, Karen Rupert Toliver.

Brad Pitt is no stranger to this blog for being noted as having iconic hair. At age 52, Brad still has one of the best heads of hair in the game, and he showed it on the red carpet, and we’re sure you wouldn’t disagree. Here’s a look at how he looked on the Red Carpet before accepting his award for Best Supporting Actor in ‘Once Upon A Time In Hollywood’.

It’s no surprise that the man who took home the Oscar for Best Actor also had one of the best-looking hairstyles of the night. At age 45, Joaquin rocks long salt-and-pepper locks with a strong mature hairline appropriate for his age. Here he is below standing with his prize.

Joaquin Phoenix stands proudly with his Oscar for Best Actor.

Boon Hoon Ho took home the most awards of anyone on our list for his film, ‘Parasite’. He won awards for Best Picture, Best Director, Best International Feature Film, and Best Original Screenplay. Sporting a head of hair as he did at 50 years old at the Oscars could have won him Best Hair, as well! Here he is below with his amazing hair and 4 Oscars.

Last year, we listed Sir Elton John as having one of the top 3 celebrity hair transplants. At the Oscars this year, at age 72, his transplants still look great. With a stunning live performance of ‘(I’m Gonna) Love Me Again’, he showed that he’s still got it in the hair and performance departments. Have a look below at the Rocketman himself posing with his Oscar.

Did we miss your favorite men’s hairstyle at the 2020 Oscars? If so, let us know in the comments!